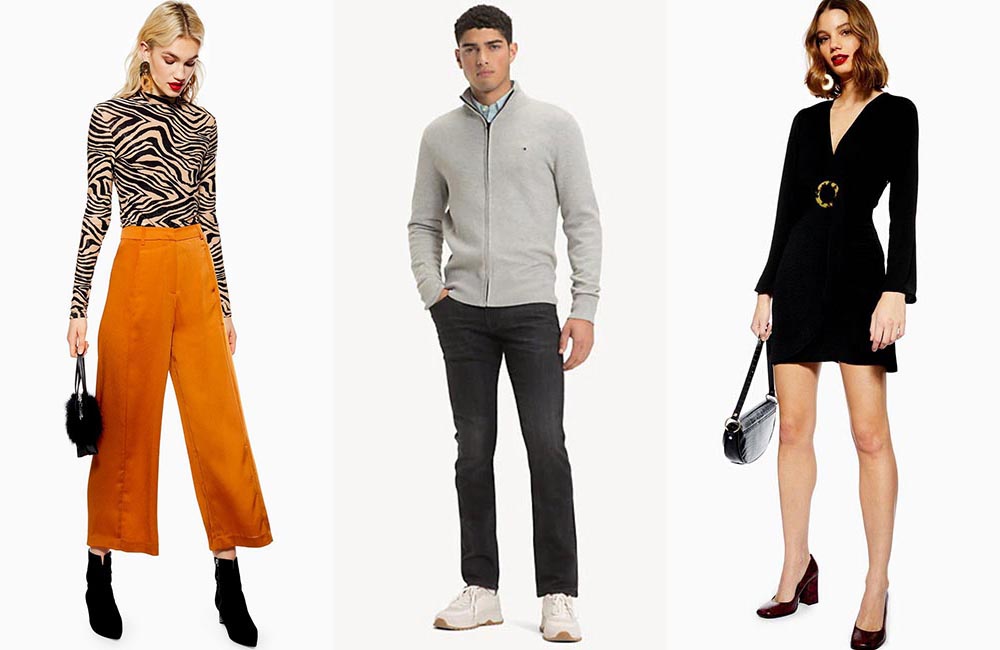 Since the end of the second world war, teenage fashion started to take on a life of its own with the introduction of cotton shirts that were knotted at the waist and tapered pants with shoestring ties at knee, along with petticoat dresses for trendy girls of the day.

Then came the swinging sixties and the time of flower power fashion. Floral shirts and floral dresses were the rage along with introduction of tailored collarless suited inspired by 60’s hit group The Beatles and open shirts and jeans inspired by Elvis Presley.

For the ladies it was all about the mini skirt look brought about by supermodel of the day, Twiggy. As we entered the age of Disco, the “70’s” saw the introduction of the bell bottom trousers and large open collared shirts for men that were common on the nightclub scene, inspired by hit films such as “Saturday Night Fever”.

For the daytime look for teenage men it was all about black leather jackets, jeans and the white t-shirt look that became a favourite of fans of the hit movie “Grease” Teenage girls maintained the mini skirt look that now was more commonly available in denim and corduroy.

Flare shirts and pantsuits became more popular towards the end of this time for teenage girls which also saw introduction of the halter top which was often paired with flared trousers.

As we hit the 80’s and the era of punk rock, fashion took on a new twist. Slim fitting “Miami Vice” suits, brogues, white trainers, jeans and logo T-shirts were the noted style of the day for young men along with tight fitting jeans and black leather jackets inspired by the look of the King of Pop himself, “Michael Jackson”.

The popular teenage style for the girls of the 80’s was mainly about Spaghetti strap dresses, shoulder pads inspired by TV shows of the day such as “Dallas” and Dynasty”.

Leggings, denim dresses and oversized shirts were the casual fashion option for the young female fashionistas.

With the approach of the 90’s saw the real breakthrough of the “Supermodel” with the likes of Naomi Campbell and Cindy Crawford becoming firm favourites of fashion followers everywhere.

Sport and fitness fashion was a key element for this generation with men’s hoodies, Doc Martens, Flannel shirts, ripped jeans and sweaters for the popular fashion choice for teenage men.

This time also saw the introduction of the infamous “Wonderbra” to the lady’s fashion world as well as spandex. The Halter dress along with the tunic dress and the midi dress all played a major part in young female fashion line-ups.

Twenty first century fashion has come a long way from the style of the 60’s and today young fashionistas are really spoilt for choice when it comes to teen fashion.

The male teens of today can chose from such a large selection of male teenage clothing. This includes a wide choice of jeans, sweatshirts, trousers, jackets as well as polo shirts and hoodies.

For sports and footwear, Adidas, Nike, Under Armour, Puma as well as Clarks shoes seems to be the choice of the day.

For the female teen, their choice in fashion clothing is endless with Jumpsuits, Faux Fur jackets, Midi dresses, Playsuits and ripped jeans being the most popular choices from fashion brands such as Boohoo, PrettyLittleThing, Missguided, H&M and River Island for mid-range fashion.

Designer fashion brands such as Fendi, Stella McCartney, Miu Miu and Burryberry as the most popular for teenage girls looking for the latest and best fashion designer labels.

MyFashionLook.ie caters for the latest in Teenage fashion and has the latest and best designs. For the female teen, fashion has them spoilt for choice with dresses and accessories coming in so many shapes, sizes and designs.

MyFashionLook.ie carries out fashion reviews on the latest dresses, trousers, jackets, lingerie, coats, tops and shoes from all the leading fashion labels of today.

In a business estimated to be worth in the region of €1.48 billion in the EU alone, the demand for teenage fashion and the latest fashion styles is on the up and expected to reach a turnover of €2 billion across the EU in 2019.