The 53-year old actress who is infamous for her role as character Carrie Bradshaw in the hit American TV series ‘Sex and the City’ has revived the classical fashion accessory in Fendi’s new video campaign about the return of their most iconic handbag to date, the Fendi baguette.

Their short video pays homage to an iconic ‘Sex and the City’ scene, and shows four Fendi-clad friends – inspired by the HBO series – running around New York City looking for the purple sequinned bag, however when they ask the shop assistant, he tells them a lady has just bought it.

The four fashionistas – who are influencers Caroline Daur, Natasha Lau, Ebonee Davis and Melissa Martinez then see Parker as Bradshaw walking with the highly coveted bag and immediately stop her to say: “Ma’am, I need that bag!” Schooling the women on what the iconic accessory is, Parker simply turns and replies “Oh, this isn’t a bag. It’s a Baguette.” 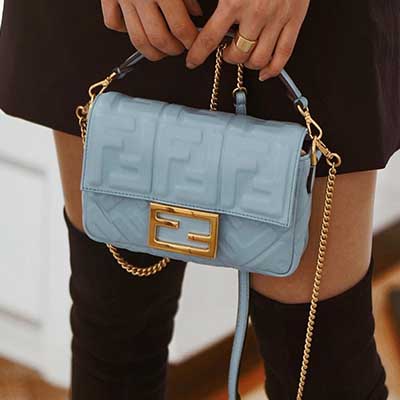 The blonde beauty previously rejuvenated her role as Jessica Parker in a recent ad campaign for Belgian drinks brand Stella Artois in aid of non-profit organisation Water.org. Chatting to the HuffPost, Sarah said: “It’s been a while. It was really fun. Slightly peculiar in the best possible way. It was especially meaningful because the purpose was to amplify this initiative.”

Sarah agreed to sign up for the campaign because of both the creativity of the advert and the message it sent out. She said: “I think just being right and clever about how they wanted to present Carrie for this particular idea.”

“I relied upon their good taste and the subversive nature of it. “I think it’s smart. … In the past, you have a script and you have all the words you need to remind you if you’ve been away for a while. But this felt like an alternate universe. I was surrounded by smart and good people. It was really easy and really fun.”